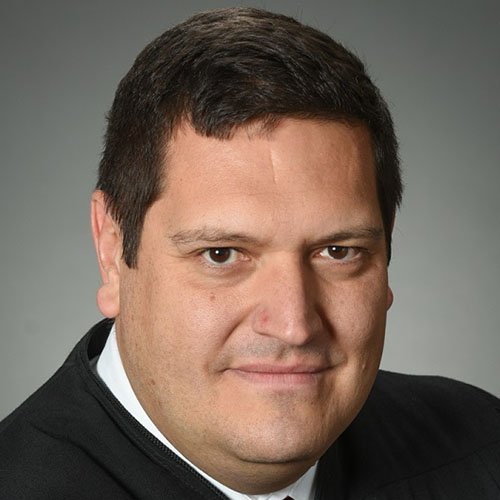 Jerrold N. Poslusny, Jr. was appointed to the bench for the United States Bankruptcy Court for the District of New Jersey in Camden, New Jersey in June 2015.  Prior to his appointment, Judge Poslusny served as Law Clerk to the Honorable E. Stephen Derby and James F. Schneider, United States Bankruptcy Judges for the District of Maryland, then as an associate and member with the firm of Cozen O’Connor P.C. in Cherry Hill, New Jersey, and finally as shareholder of Sherman, Silverstein, Kohl, Rose & Podolsky, P.A. in Moorestown, New Jersey.  Judge Poslusny concentrated his practice in bankruptcy law, workouts and commercial litigation.

Judge Poslusny received his B.S. degree from the Pennsylvania State University and his J.D. degree from the University Of Maryland School Of Law.  He is admitted to the state bars and district courts of Delaware, Maryland and New Jersey, and the Third and Fourth Circuit Courts of Appeal.  He is a member of the National Conference of Bankruptcy Judges, American Bankruptcy Institute, Association of Insolvency and Restructuring Advisors and the Camden County Bar Association.  Judge Poslusny has served as an editor, author and frequent lecturer to professional and educational organizations.